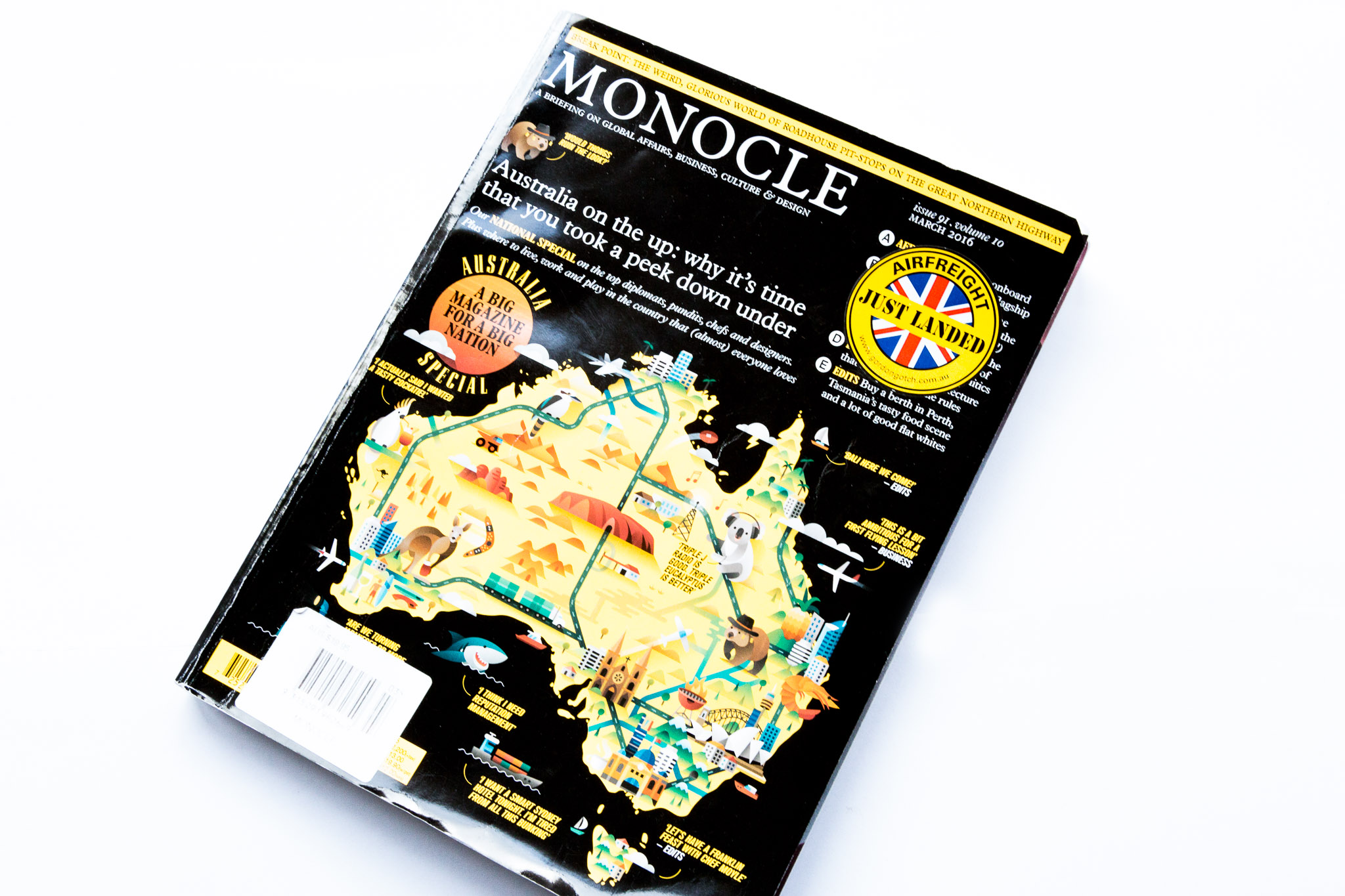 Each year, the March issue of Monocle magazine is a national special, focusing on one nation pushing forward in politics, technology, community and/or innovation. The 2016 national special puts Australia in the limelight, with features on our national politics, unlikely international relations, grassroots industries, companies championing Australian made, and what it means to be an Australian today.

The feature in pages 102-3, however is a poignant reminder of the image Australia, and Australian companies send to the world. Toast Creative Managing Director Nick Sammut spoke to Monocle journalists Andrew Mueller and Matt Alagiah about successfully branding a company down under, iconic Australian brands and how to avoid clichés and cop outs with logo and advertisement design.

The March issue of Monocle magazine is available now in all good bookstores, newsagents and airports worldwide. You can also purchase a copy or read the Image Nation article on the Monocle website.

Please find the full interview with Nick Sammut and Monocle below.

‍Monocle: When branding anything Australian, or for Australia, how hard is it to resist the temptation to lapse into the Australian clichés?

Nick Sammut: It’s arguably no harder to fall into reliance on clichés in Australia than anywhere else in the world. It could be said that as a new country there’s a particular brand of enthusiasm, rather than an old world cynicism. It’s this new world ethic that props up and carries patriotism so effectively and which we see articulated in a quintessentially Aussie manner. Yes, association can be a great thing if done correctly and in a smart way, and trust is an emotion that can be powerfully triggered through recognition, in turn engaging the consumer. By pulling apart and simplifying the elements we can find a great harmony through colour, iconography or typography. Australians support Australian brands but all good designers will agree it’s all about the idea. Seeing or understanding the abstract or hidden message in a brand can be the discovery, ultimately defining the brand as meaningful and effective, clichés or not.

‍Monocle: Are there values peculiar to Australian consumers? Which should be reflected in branding and advertising?

Nick Sammut: It really depends on who you’re talking to. Cost is one ‘value’ that certainly feels more relevant to consumers here than in the UK. Australians definitely like value for money; we love a bargain and aren’t shy to negotiate any time, any place. Having said that, people are also willing to invest in quality if they can afford to. When it comes to how and where Australian tropes are expressed, I think that advertising, more so than branding, can very effectively pick up on and express Australian attitudes and sentiments. Campaigns are ripe for storytelling where these values can be played out. Achieving the same in branding however, will depend largely on what type of branding is employed and your team’s design competence.

Monocle: Are there any familiar Australian branding/advertising tropes that don’t work as well as they once did?

Nick Sammut: It’s easy to cite the obvious and overused tropes - the green/gold palette, kangaroos and koala bears. As a nation we continue to mature culturally and intellectually and with that comes a particular style of brand communication, a particular tone of voice. Designers have a responsibility to draw upon the international language of design and apply it to their local projects wherever they are. Quality design and communications must necessarily reflect the marriage of broad thinking and honed execution.

‍Monocle: Do you perceive a change in the way that Australian brands employ indigenous imagery – has it become more appropriate/sensitive?

Nick Sammut: Yes, there’s most definitely a greater sensitivity when employing indigenous imagery and there are plenty of examples to support that view. While aboriginal art is used more carefully in brand communications it’s important to note that its popularity makes it subject to misappropriation. Being popular doesn’t mean it’s liked or that the context of its creation or creator is understood. Interestingly, indigenous imagery is often used to communicate quality and even prestige while your koalas, greens and golds are used, more typically, to convey the parochial, every day offers.

Monocle: Is it a good move for Australian companies to emphasise their origin in the global marketplace – do people generally have positive associations?

Nick Sammut: Yes, why wouldn’t it be? There are a lot of successful companies heading abroad. Australians are acknowledged for their solid work ethic and friendly business style but I’m not going to go as far as saying that people generally have positive associations about us. Being Australian certainly doesn’t exempt you from making enemies or mistakes.

‍Monocle: What – to your mind – is an example of a current successful use of a specifically Australian trope or image in branding?Nick Sammut: It’s got to be the kangaroo and I’m going to hold Qantas up as one of our all time successful and still current brands that uses it. It’s true what they say. You land at Sydney airport after time away and it’s hard not to feel that pull on the heart-strings when you lay your eyes on that kanga.

Subscribe to Monocle magazine or purchase the issue here. For more information about Toast Creative and to see our work, click here.

‍If you are interested in working with us at Toast Creative, please get in touch.